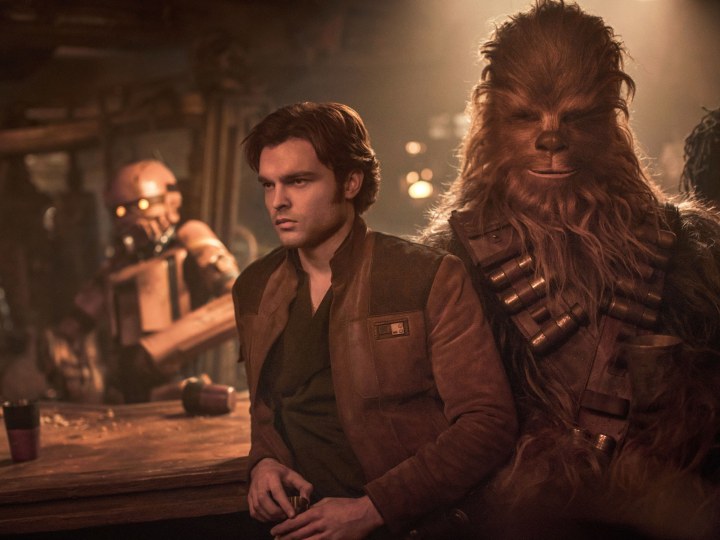 Lucasfilm maybe should have taken Han’s advice, because while Solo: A Star Wars Story isn’t a bad film, it isn’t a very good one, either.

One of the main challenges for Lucasfilm in making this film was finding the person who could fill Harrison Ford’s massive shoes. Han Solo is an iconic character and it was going to take someone special to step into the role. They settled on Alden Ehrenreich, which wasn’t a bad choice. Ehrenreich does a pretty good job encapsulating the swagger and snark that is Solo, and by the second half of the film, I bought it. Whether or not that stands the next time I pop in the original trilogy remains to be seen.

Visually, the film is beautiful, which isn’t surprising. The action set pieces are what you would expect from Lucasfilm at this point, although I could have done without all the non-humanoid creatures that kept popping up. We get it. There are weird looking aliens in this universe. It just feels like, at this point, that every film is trying to one-up the last with what kind of strange creatures will pop up next. And without going into spoilers, I’m sort of done with the droids, too. The film also falls into Marvel territory in regards to its villains. Underdeveloped and with a couple of twists that sort of made me shake my head and go, huh? Was that really necessary? The film almost felt as if it were a couple of different films pieced together, which isn’t surprising given the behind the scenes stuff that went on.

There are a number of bright spots, however, that pull the film from terrible territory. The cast is one of them, and this is where the movie really shines. Emilia Clarke’s Qi’ra is interesting, with just enough of mystery to make you take notice and Woody Harrelson’s Beckett is exactly what you’d expect. As noted everywhere else on the interwebz, Donald Glover’s portrayal of Lando Calrissian is next-level incredible. He embodies Billy Dee Williams perfectly, and then ramps it up a notch. I won’t be surprised, given the reaction to the character, if Lucasfilm announces a Lando spin-off film in the near future. Although, the opening weekend numbers of Solo might put a damper on those sorts of notions.

The main problem with the film, besides the pacing which was all over the place, is the same problem that plagues all prequels. There are no real stakes. We all know the overall outcome before the movie starts. Both Han and Chewie are going to survive, and there is not enough development of any of the new characters for us to really care about what happens to them. It was the same problem I had with Rogue One. And yes, I know that Lucasfilm provides a lot of extra content and backstory in the tie-in materials, but unless you’re a hard-core Star Wars fan, it’s unlikely that you’ll seek this information out just to fill in any gaps.

Overall, the film is okay, bordering on good. But that’s not what I want from my Star Wars films. I want fantastic, amazing, I-can’t-stop-thinking-about-it incredible. And I’m not sure that that’s what we’re going to get while Lucasfilm keeps going back to the same old well for story ideas. (The exception to that is an Obi-Wan film (or trilogy) because that is the story I most want!). In this vast and varied galaxy, there have to be other stories to tell. Let’s hope that the studio realizes this sooner rather than later.

I am a movie, theatre, music and book lover. I have opinions on stuff and sometimes feel like sharing them. You can also find my take on geeky stuff at www.schmoesknow.com

I also write a little fiction (or sometimes a lot of fiction). You can find that part of my life at erinparisien.com